The Genome Editing Laboratory researchers together with the FSBI RCMG Counseling Unit as part of an international team have described a new hereditary disease called KINSSHIP syndrome (PONSSGUL syndrome), which has been added to the OMIM database under the number 619297 (https://omim.org/entry/619297). Sixteen patients described in this publication, along with the two previously described patients had a number of common recognizable features - renal anomaly, Nivergelt/Savarayan mesomelic dysplasia, seizures, hypertrichosis, intellectual disability, and lung lesions – that gave rise to syndrome name. The disease is caused by mutations in the transcription factor AFF3 gene, which regulates the expression of genes involved in neurogenesis and development. Experiments on Danio rerio fish were carried out to prove the role of this gene in the disease process. 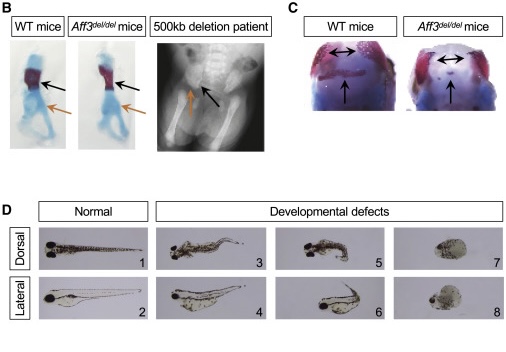