An article published by “Biomedicines” journal presented analysis of clinical genetic and molecular cytogenetic characteristics of inverted duplication syndrome with an adjacent terminal deletion of the short arm of chromosome 8 - inv dup del (8p) in eight case studies. The scientific study was carried out by the researchers of the Laboratory of Cytogenetics (Shilova N.V., Head of the Laboratory, Holder of an Advanced Doctorate (Doctor of Science)) and geneticists of the Scientific Advisory Department (Professor Dadali E.L. Head of the Department, Holder of an Advanced Doctorate (Doctor of Science)). 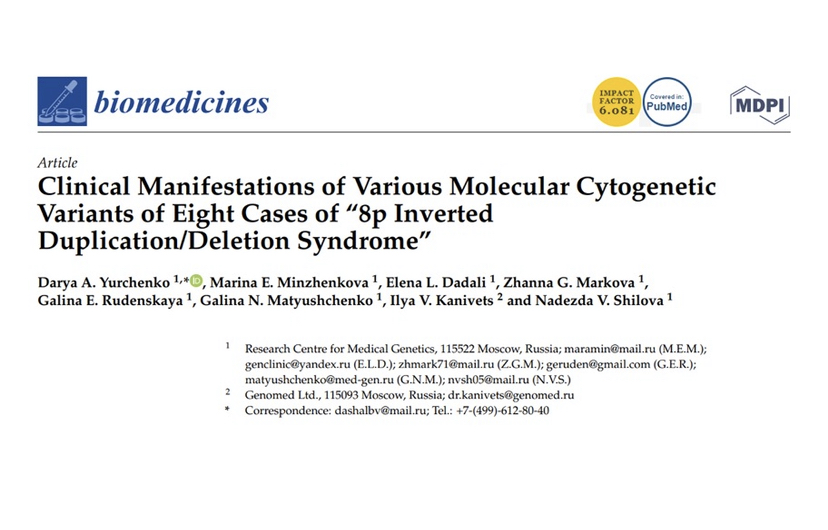 Inverted duplication syndrome with an adjacent terminal deletion of the short arm of chromosome 8 - inv dup del (8p) is a rare complex structural chromosomal rearrangement with a wide range of clinical manifestations. Molecular cytogenetic variants of chromosomal imbalance depend on the mechanism of rearrangement formation. An analysis of the clinical genetic and molecular cytogenetic characteristics of the inv dup del(8p) syndrome as well as the genotype-phenotype correlation in eight unrelated patients with the inv dup del(8p) syndrome was made. The main clinical manifestations in all cases are psychomotor retardation, muscular hypotension and craniofacial dysmorphy. Central nervous system malformations such as agenesis/hypogenesis of the corpus callosum were common in five patients. Convulsions were noted in only one case. It was found that the main reason for the formation of the rearrangement was ectopic recombination (7/8 patients) and only in one case it was due to the U-type exchange. The characteristics of the genomic imbalance were different, depending on the mechanism of formation, which made it possible to distinguish two molecular cytogenetic variants in the patients described by us. No association between molecular cytogenetic variants and clinical manifestations was found.