A boy with multifocal epilepsy with infantile spasms and hypsarrhythmia with minimal organic lesions of the brain structures had DNA-diagnosis using complete exome sequencing. As a result, a heterozygous missense variant was found in the PHACTR1 gene, which encodes a protein belonging to the G-actin-binding protein cofactor protein family proteinphosphatase 1 (PP1). PHACTR1 has not been previously associated with human diseases.

The detected missense variant turned out to be a de novo variant. In vitro functional studies together with English colleagues showed that the mutation reduced the affinity of the PHACTR1 protein for G-actin and increased its tendency to form complexes with PP1 catalytic subunit. These properties are associated with an altered subcellular localization of the PHACTR1 protein and increased ability to induce cytoskeleton rearrangements.

“This research started 5 years ago, when Fedor Konovalov discovered this finding”, Andrei Marakhonov told us. “But even though we managed to do experiments to prove the effect of mutation on the PHACTR1 protein function, we could not publish that study in a good journal at that time. The reviewers wanted some more convincing evidence or more patients. Therefore, we continued our research. However, it is not an easy thing to do when it comes to these genes. Trying to create a model fish line turned out to be a failure. Therefore, we decided to carry out molecular studies more thoroughly.”

“After an in-depth analysis of the literature and various databases, we hypothesized that PHACTR1 might interact with the Slack potassium channel. At the same time, mutations in Slack were known to be associated with malignant migratory partial seizures in infancy, characterized also by seizures and mental retardation. The clinical picture in such patients appeared to be very similar to our patient's disease. Therefore, we suggested that both PHACTR1 and Slack were in the same molecular pathway. We reflected this idea in our publication.” 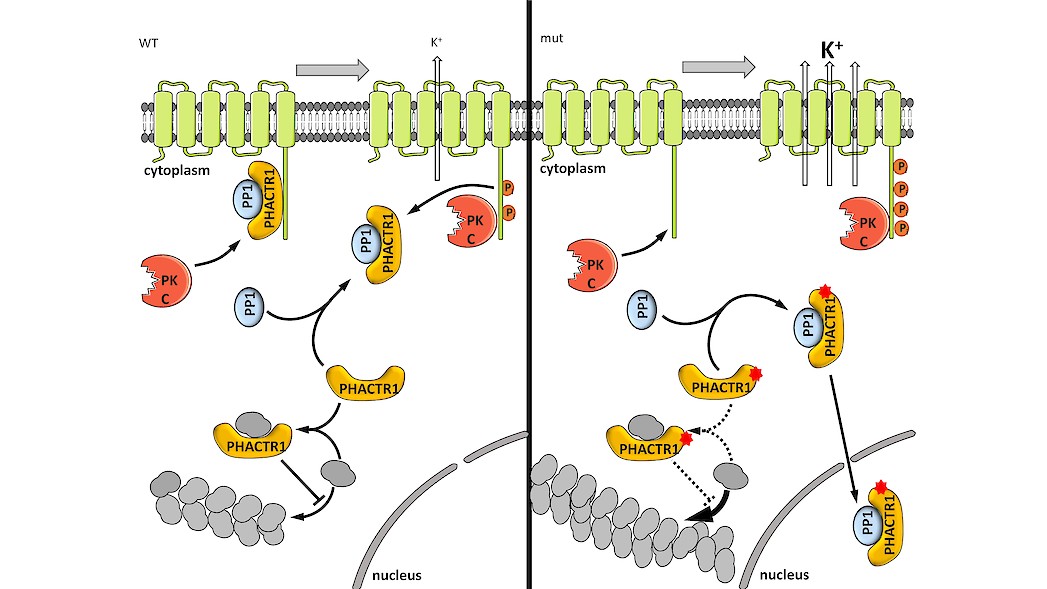 A.Yu. Filatova drew the pattern of molecular interaction based on the words of A.V. Marakhonov and M.Y. Skoblov