The amount of human long noncoding RNA (dnRNA) genes is comparable with the number of protein-coding genes. However, only a small number of dnRNAs have been functionally annotated to date. It is known that dnRNAs can be involved in many key cellular processes, including regulation of gene expression at transcriptional and posttranscriptional levels. Moreover, the expression of long non-coding RNAs can be altered under various pathological conditions, and their deregulation can play an important role in disease progression. To date, the lncRNADisease2.0 database contains information on 19'166 dnRNAs associated with 529 diseases, both monogenic and polygenic, including heart failure, cerebral injury, hypertension, tumor diseases.

In this work, the researchers of the Laboratory of Functional Genomics investigated in detail the widely expressed long non-coding RNA LINC00493. For the first time, the exact exon-intron structure of LINC00493, its cellular localization, and its effect on cell physiology were determined. As a result, it was shown that LINC00493 affected cell viability depending on the cell type.

During the course of work, it was also found that LINC00493 has an upstream open reading frame, which encodes a small protein SMIM26. Recent work by Fouzia Yesmin et al has shown that SMIM26 interacts with mitochondrial proteins. Thus, one could reclassify LINC00493 as a protein-coding gene. However, experiments performed on LINC00493 knockdown and overexpression suggest that both the SMIM26 protein and the LINC00493 transcript sequence itself affect cell viability, but in the opposite manner. 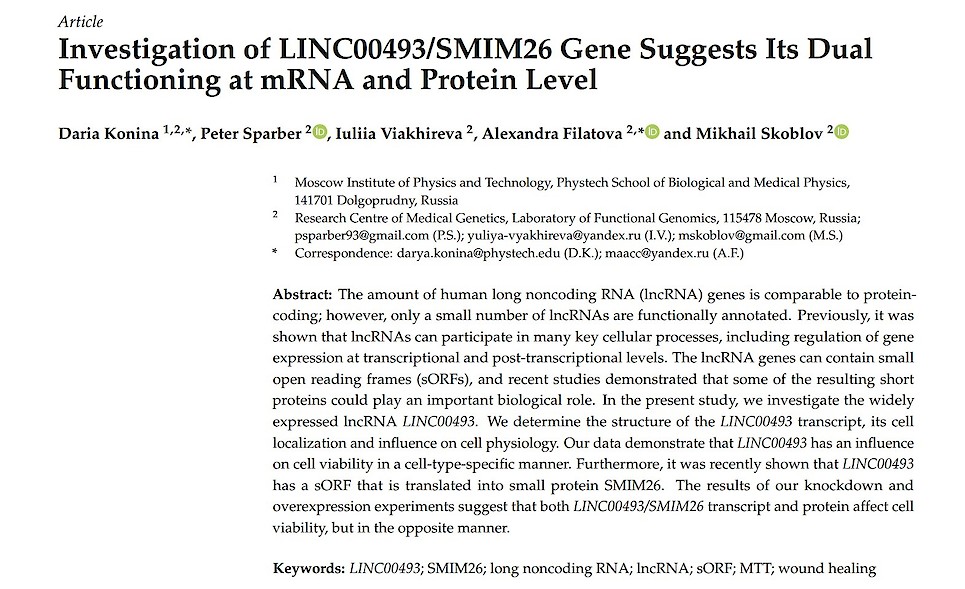